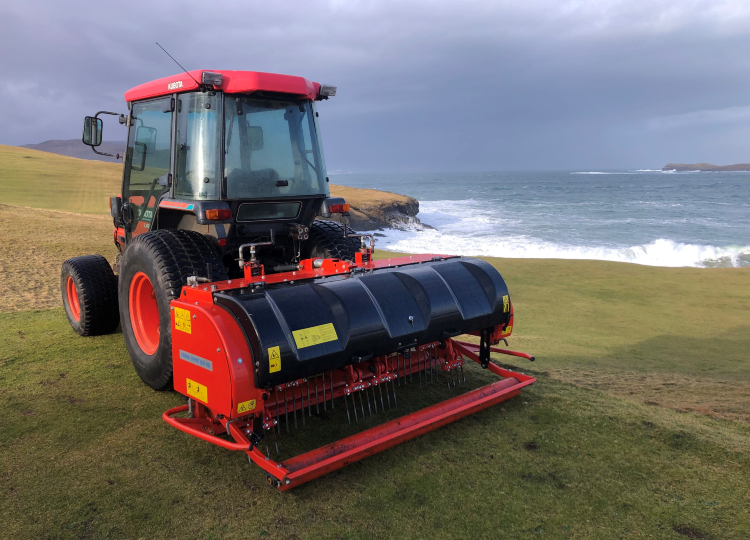 Durness GC, in Sutherland, is unquestionably as spectacular as it is remote, with rugged coastline, exquisite sandy beaches and windswept moorland in abundance. Featuring on the Scotland North Coast 500 route, a short drive to Cape Wrath, this unique course is in a Scottish Natural Heritage SSSI and Special Area of Conservation site.

“Literally hundreds of very welcome visitors have made the club a destination across the pandemic, meaning our committee found budget for a Terra Spike far sooner than we all imagined,” said Alistair. “Our pedestrian aerator, long past its best, could no longer make it out the shed. The GXi8 was a significant investment, but one we knew we had to make.”

“The GXi8 came with a new PTO shaft which Mike cut. I chose 12 mm tines as the delivery option and handover training was very thorough,” continued Alistair. “First outing was around the greens to about 120 mm in depth. We’ve a sandy subsoil in parts, but not all over. We could have gone deeper, but I can’t be sure yet where stones are lurking, so I’m taking the depth down in increments. There’s no set schedule. We’re weather dependent up here, have no irrigation, so things can change quickly, it’ll be a bit of a learning curve. We get very wet periods in the winter, so it’ll get done when the conditions are right.”

Durness was built in 1988 as a nine-hole course with nine added tees. For an 18-hole experience, the original nine holes are played in reverse off the alternative tees, the return nine bringing an equal amount of enjoyment and challenge, while giving a different perspective.

“Members remarked favourably about the exceptionally clean results on the greens after tining, and, now I’ve started on the fairways, it deals with undulations very easily, too. Even our flatter fairways I wouldn’t call flat, so the smoothness and tidy job is impressive,” continued Alistair.

Another long-awaited use for Alistair’s Terra Spike is a yearly plan to overseed greens.

“I’ll be pot seeding,” explained Alistair. “Using worn tines on the Terra Spike, I’ll make a very shallow hole, about 1 cm down, then overseed with fescue. This is another task I haven’t been able to do until now but will help maintain quality moving forward.

Without question, Durness’s surroundings take sustainability to a different level. For example, in the club’s rental lease there is provision for local sheep to graze all vegetation on the course from mid-November until December and again from April – mid May, except for the greens and surrounds which are fenced off. At other times, the sheep are penned inside for winter warmth or during competition season, coaxed to other hillside pastures.

Looking north, the nearest mainland coast belongs to Iceland, 510 miles away.  For context, Durness is a 662-mile drive to London. Clubs and trolleys can be hired at the mostly unmanned club house, where a day ticket is just £40 and visitors use the honesty box to deposit their green fees.

Six years have now elapsed since Alistair took over his role, long enough to be aware of climate trends and consistencies.  Even in his remote location, there have been changes in weather patterns, hard to fathom.

“I agree with many greenkeepers that it’s becoming difficult to know where one season ends and another one begins. There is less consistency. Spring of 2020 and again, 2021 have been remarkable because of how dry they were. Summer 2021 was also incredibly dry and here, it appeared we went straight to a  prolonged wet winter, bypassing autumn 2021 completely. So, we’ve had drought and famine and little in between.

The impact of no guaranteed weather windows can affect Alistair, not just because he is a lone worker, but because he has finite supplies and doesn’t have margin to be wasteful.

“I struggle sometimes with fertiliser and spray applications. Without irrigation you must be careful when you take the decision to ’go’. Frequently, you must wait for the best time to make sure the application rates for fertiliser can be realised or spraying can be washed in.  So, whether it be an evening or a Sunday afternoon, you prioritise the course.

“Flexibility has become part of my life. Golfing on Durness wouldn’t be nearly as successful if we took a regimented approach. The club trusts me to manage my hours, balancing summer, winter, busy, quiet... When the weather is calm you just want to get on with it. So, during the season if there’s a squall in the morning, I might elect to work at night.  On an 18-hole course you might get a three hour start before golfers catch you up but on a nine-hole they can be on you quickly.  We’re not at the stage where we have queues. If the club becomes significantly busier, then we might have to review. But the influx of visitors has allowed me budget for small amounts of extra kit and equipment that has the benefit of speeding up processes, so it all still works.”

Alistair plans his own holiday time for the off season and is never away for very long. “If it’s playable, we’re always open. weekend competitions don’t start until the end of May, with 30 spaces in the morning and 30 in the afternoon. Realistically from November onwards it’s local members but we do get some hardy visitors.”