Mowing double for the Royal Burgess 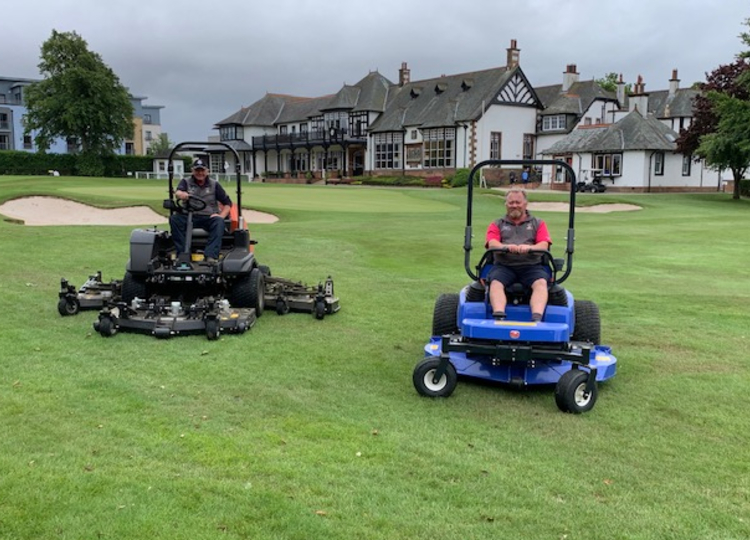 When you’re the world’s oldest golfing society keeping ahead of maintenance is always a priority. Chris Yeaman, long-time Course Manager, right, at The Royal Burgess Golfing Society is a stickler for detail, looking for the highest of standards from his team and his machinery fleet.

With two mowers on his wish list Chris decided to demo several machines for each. His first brief was for a very nimble and tidy mower to work in between the course’s many trees. Step forward the Izeki zero-turn SZ330. “I’m an Iseki fan. We have Iseki tractors; we really like them so I hoped this would go well. It was so easy to use. There were absolutely no tyre marks, grass was mulched perfectly and it literally got into every small space. Easy decision.”

The next search was for a wide area mower which was powerful, fast and which left an exceptionally clean finish.

“We compared a few,” explains Chris. “We took the Jacobsen HR 500 on demo and it was almost there for us. It took on the big areas of rough effortlessly but coming around our trees it didn’t get in as tightly as I wanted. I gave Wilson my feedback. He listened, took the machine away, made a few amendments to the front wheels and told me to try it again.

“It was brilliant. The Fairways GM engineers had customised it with a bespoke alteration exactly to our specification, making it absolutely perfect. How many companies do that? So, it does a fantastic job. It’s very powerful and offers a real quality of cut, leaving no clippings or mess even on days when the conditions are less than ideal. It’s much cleaner than what we had before.”

Wilson Morrison, Fairways GM’s Sales Manager said: “Our service engineers are pretty talented at this sort of stuff. The mower is robust and over 3m wide but small changes to the front wheel meant it could reach into the trees as it turned and give him that extra closeness.”

Chris Yeaman said: “The sales and workshop team at Fairways look after us extremely well. The back-up is second to none with support too, from Jacobsen. It’s been another really good experience.”

The Royal Burgess Golfing Society was founded in 1735 and the Barnton club has a greenkeeping team of seven.