The Glens take delivery of a Jacobsen TR3 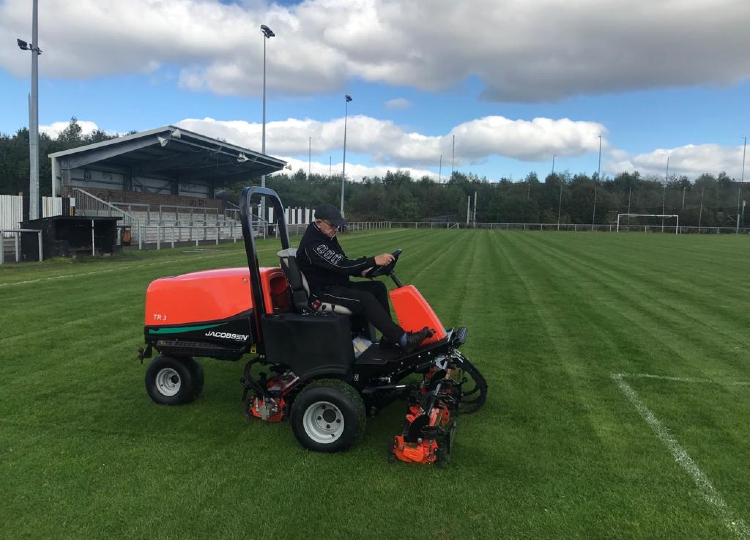 Groundskeeper, Eddie Smith, (80), at West of Scotland League team, Rutherglen Glencairn FC, has had a 45-year association with the club. A long-time supporter of the South Lanarkshire side, he was bar manager at the Social Club for over ten years, during the 1980s, and later served on its committee in many capacities. Not surprisingly, when the club’s former grounds person retired five years ago, Eddie was the one to step forward.

“I’ve always been a keen gardener,” said Eddie. “I started looking after neighbours’ lawns when I retired to give me something to keep me busy. Looking after the pitch was something I was happy to do and a natural progression.”

The club’s previous mower at the H B Allan Stadium began to fail this summer, so Eddie contacted Stuart Cameron, from local dealer Fairways GM at Inchinnan, to discuss requirements and budget. A reconditioned Jacobsen TR3 triple cylinder mower with Jacobsen’s signature cut was the unanimous choice.

“Stuart brought me the TR3 to try on demo and it made a difference to the quality of cut immediately. A few weeks later, the sale went through and it’s now on site and in use. He gave me a thorough run through of all its features and how to take care of it and we got it set up for what I need.”

“It’s had two outings in its first week and I timed it on the second time round; the full-size pitch takes about 90 minutes. It’s easy to use and comfortable. The team already have noticed the improvement. The first thing they said was, ‘Pat on the back, Eddie.’ So, everyone’s delighted with the purchase, and we’ll just keep cutting as long into the autumn as we can.”

The TR3 is powered by a 24.8hp Kubota engine and has a 2.02m cutting width allowing the machine to cut around 4.4 acres p/h at around 6 mph.