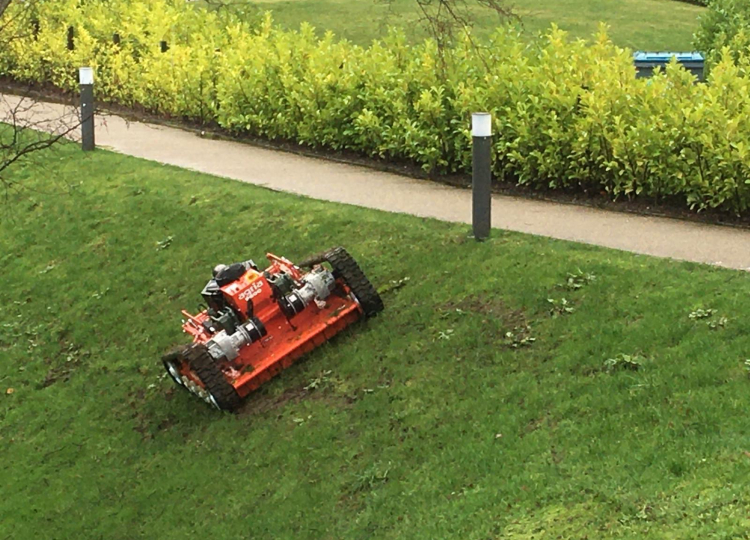 A company which specialises in commercial and residential ground care across north east and central Scotland is one of the first adopters of the agria 9600 remote hybrid bank mower.

Morrice Diplexcito, General Manager at Proserv, which operates from Perth to Aberdeenshire, opted for the 112 cm wide version of the agria 9600, just in time for the final four weeks of last summer’s cutting season.

Three from Proserv’s grounds maintenance team of 12 were put forward for full training from Agria UK’s lead instructor, organised by dealer, Fairways GM.  Everything from set up, to working the control pad confidently and loading was covered thoroughly to help Proserv use their machine optimally across their sites.

“We knew the Agria 9600’s use last season would be ad hoc as there wasn’t enough time to get it into any sort of work pattern. We tidied a variety of locations with a one-off mulch ahead of winter and it was very effective. Each time any of our team brought it out they created a bit of a stir; our agria became our very own mobile tourist attraction. People would stop, be amazed then almost expect if to fly off,” commented Morrice. “It was hugely acclaimed.”

“But instantly everyone on our team was fine with it, it felt safe, even on the tallest and steepest banking.  Our operators could stand secure on flat ground well away from risk.  And that’s principally why we got it, to prioritise H&S.  Previously, we could only strim complex sites partially. This cuts forward and back, mulches on demand and will see us tackling terrain previously out of reach, meaning our operators will be able to make an even better job while keeping out of harm’s way.”

Contributing to its distinct look, the agria 9600 boasts rubber caterpillar tracks and a low centre of gravity which help it take on the challenge of 50° slopes.  The operator uses a joy stick on a light, hand held LED display control panel to manage six key mower functions. The display shows travel speed, cutting height, hours of operation, the battery charge status, the radio signal strength and an on / off switch.

A Hybrid drive concept means the agria 9600 combines a petrol engine with being electrically driven. This set up is therefore more environmentally friendly than hydraulic systems. The petrol engine powers the mower and generator while the generator produces electricity in Safety Extra Low voltage (48V) for driving.   With a generous forward speed of 10km its range is an impressive 300 m giving scope to tame awkward-to-reach terrain from a healthy distance. Should frequency be disturbed, the remote control changes to a different band frequency automatically.

“Now we’re back into the new season,” continued Morrice, “plans are in place for cutting on a two-week return. At the moment the agria’s got seven out of ten working days filled, so there’s still capacity to take on more. Many of our commercial clients are house builders. Timely and tidy grounds maintenance contribute vitally to the quality of a project.”

Proserv received their agria 9600 from Scottish dealers, Fairways GM, based at Kinross. North Area Regional Manager, John Morton, said: “We’ve had a long-standing relationship with Proserv and their work means they are constantly on the go. For easy transfer and versatility this suited them perfectly.”