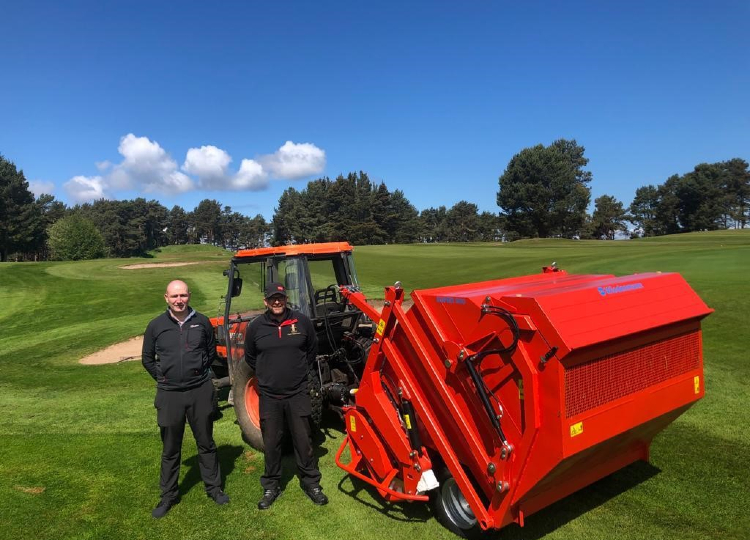 Head greenkeeper at Forres Golf Club, Ross Macleod, has chosen a Wiedenmann Super 500 for productivity and versatility. The 4-in-1 sweeper collector was delivered by Scottish Wiedenmann UK dealer, Fairways GM, out of their Aberdeen depot.

“It is going to help us move forward,” began Ross. “We’re a small staff; four in total, and constantly cutting our course from wall to wall. Rough can involve two staff on ride-on mowers for three days a week. With the Super 500 we can dispense with one of those mowers, save on fuel, and start to implement a more comprehensive rough management plan.”

“Our priority is to tackle rough in play. Some areas we will put off until later in the season but come the winter, we will have cut everything at least once. Over time the Super 500 will bring out-of-bounds areas back under control, delivering uniformity across the site and hopefully, long wispy grass.”

Ross began his apprenticeship at the Moray club on leaving school and by 2003, at the age of 24, had become head greenkeeper.

Another key aspect of the Super 500’s remit is to use it for leaf clearance and collecting other course debris.

“Being a parkland course, fallen leaves and dropped pine needles are a constant challenge,” continued Ross. “Until now, aside from backpack blowers, we’ve had to let the wind deal with them.”

“This is a new tool in our armoury, though. We can tidy areas and make a significant impact to course presentation.”

“The Super 500 makes a substantial difference all over the course. I’m grateful to the club for the investment as they can also see its potential and where it will take us in the next five years. Wherever we deploy it, the course is better presented and prepared. Crucially, it always saves on greenkeeper time. Those hours released back into our day can be spent on a whole list of jobs we just don’t get the time to touch.”

John Morton, Fairways GM’s Northern Area Sales Manager, said: “The Super 500 has immaculate H&S credentials and copes well on undulations. It’s high dump feature means Ross and his team can empty the tank on to a trailer rather than driving back to base. It’s one machine but gives so many benefits.”