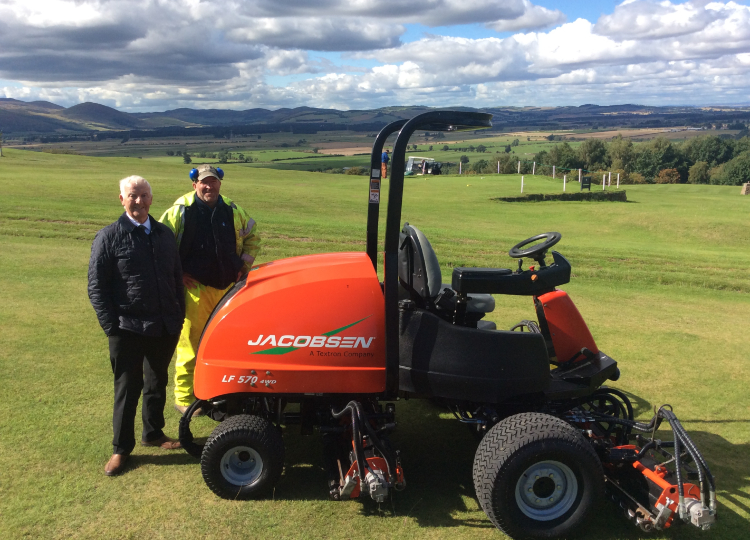 Lone greenkeeper, Peter Moffat, at Wooler Golf Club tends the nine hole, 18 tee site on his own. The course at the village of Doddington is around 15 miles south from Berwick upon Tweed and is next to the Northumberland National Park and gateway to the Cheviot Hills. Lindisfarne and Bamburgh are just a short drive away.

With his previous Jacobsen LF 3800 fairway mower approaching retirement after 20 plus years, Peter and the club’s committee opted for another refurbished Jacobsen to keep the Northumberland course on point. This time they chose an LF 570 ride-on high performance reel mower delivered by Robert Marshall from Ransomes Jacobsen dealer Fairways GM at Kinross.

“It’s doing just fine,” said Peter. “Some features are a little bit different, others quite similar, so the transition to the new machine has been easy…. I’m using it on fairways tees and aprons twice a week if I can. For long parts of the summer, I was only cutting once a week as it was so dry, but invariably things will slow by the end of October. The new machine obviously gives us a better-quality cut and we can get down further than our previous machine, but no complaints at all.”

Robert Marshall said: “The larger tank means less journeys to refuel, that’s quite a benefit for someone like Peter, working on his own. The signature Jake cut, and its fast transport speed also suit the needs of a course like Wooler perfectly.”