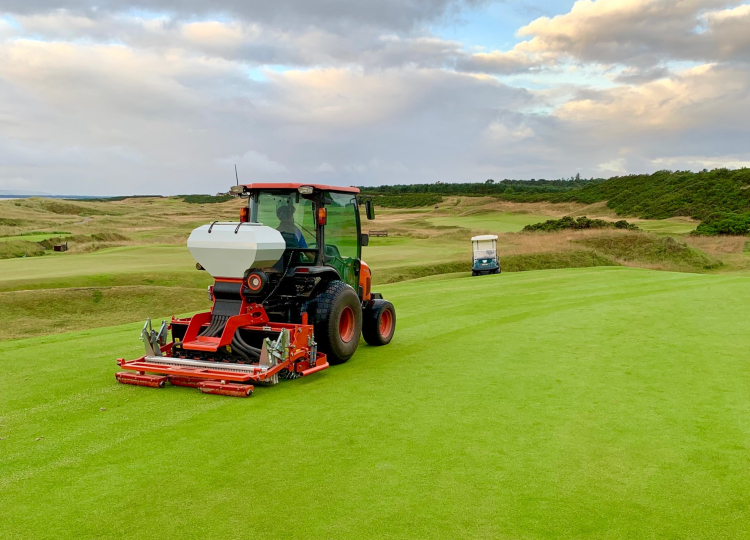 Imagine your club is in the northerly outreaches of the UK and has truly unpredictable Scottish coastal weather.

Next, factor in that you are a bucket list destination, with 36 holes, and the whole season’s tee times are fully booked months in advance.

That is the reality of Eoin Riddell, Course Manager at The Royal Dornoch Golf Club, renowned the world over for its 18-hole Championship Links and sister course, the Struie.

Now in his 37th year at the club, Eoin, and his skilled team of 20, are accomplished at executing their maintenance tasks efficiently at speed, to accommodate the unique demands of their inspirational surroundings. Mother Nature also cuts them a little bit of slack, bringing over 18 hours of daylight in their busiest months.

At the start of summer Eoin took delivery of a Wiedenmann Terra Float Air, a 3-in 1 pneumatic overseeder, from Wiedenmann UK’s Scottish dealer Fairways GM at Inverness.  In just two months, it is already revolutionising the way his team seed their greens and other areas across the vast links courses.

“Traditionally, using a disc seeder, once a year, we’d give the greens a double-pass during the end-of season maintenance week. But I’ve been looking for something more dependable that could go out during the season without disruption,” explained Eoin.

“When the Air came out at first, I liked it, but its spiker-headed tools that make the seed bed holes weren’t so good for fescue; the holes were too small.”

“Then I saw it again at The Links Club at Carnoustie in April this year. Wiedenmann UK’s Mike James demonstrated the new conical roller sleeves which make holes especially for fescue. Instantly, it resonated with me, and I thought, ‘Yes, that’s exactly what I need’.”

“The Air is a game changer. We can seed mid-season, with minimal disruption,” continued Eoin.

“Last week for example, in the space of 1½ hours, it went out on two greens that are a little poorer than others on the Championship course and then headed to the putting green. No one realised we had been out.”

Royal Dornoch uses pure fescue on its greens at a rate of 10 -15 grammes per square metre depending location. An on-board computer stores data from earlier runs and lets the operator amend the application rate at any point in the process. This allows for 100% accuracy, important when dealing with small quantities or indeed, valuable, or rare seed varieties. After the seeds are in the ground, a double layer sweeping brush with floating properties follows on. A further three-part roller, like the one on the Wiedenmann Terra Spike GXi6, means you have an optimal brush and roller combination to incorporate top dressing materials to the ground, before smoothing the surface.

“The calibration is simple. You just weigh out your seed. You enter the amount into the computer. It doesn’t matter what speed you go; it just dispenses the right amount. The floating roller is immense. It follows undulations very well; some greens are especially large; we’ve a hectare and a half on the Championship, and on the second course another full hectare.”

Results from the first eight weeks of use have hugely surpassed what Eoin was imagining.

“Depending on the weather, you would hope to see germination in around a couple of weeks. So far, strike rate, coverage and quality are first class. I knew it would be good, but not unbelievably good. It’s not very often I say this, but the results have blown me away!”

Now with reliability and accuracy assured, Eoin has decided he will dispense with the old methods of seeding once a year and go for the ‘little and often’ approach, safe in the knowledge that he’s not causing interruptions to play.

“All we do is run over the greens with the machine to make the holes, get it calibrated, top dress it and give it a roll and that’s it back into play. Less than 20 minutes a green, and the members don’t even know we’ve been… It’s so quick we’ve decided to hook the Air to a tractor and have it on standby. If someone comes in and has an hour spare, I can send them out to seed bits and pieces.”

“Four of the team trained on it at the handover session. In time, everyone on our staff will learn - it’s our practice that everyone gets a chance on every machine.”

Royal Dornoch already has a Wiedenmann Terra Spike GXi8, a Super 600 sweeper collector, a Terra Rake and a Terra Brush.

“While we’ve always been impressed by the build quality and the backup with Wiedenmann, the buying decision was not about who the manufacturer was … this was about the right machine for the job and it was the Air that could give us the results we needed.”