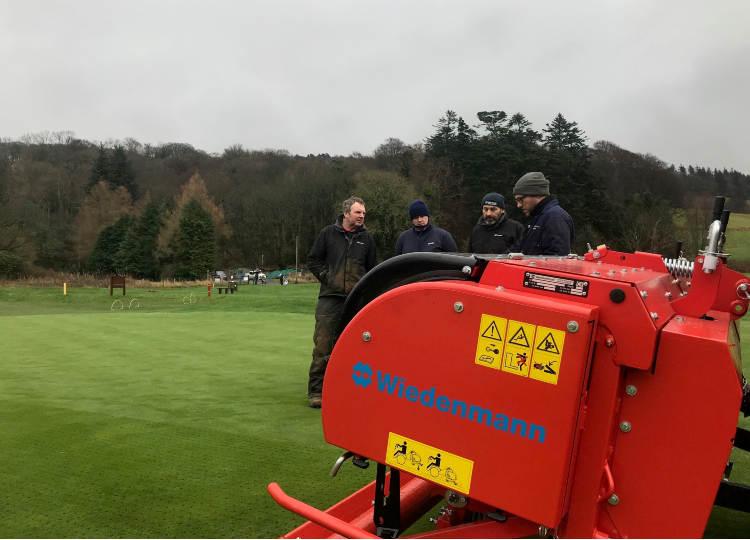 Iain Barr, Course Manager at Largs GC, Ayrshire, has known and used Wiedenmann deep aerators since they were launched 30 years ago, and has had close association with six machines.

Iain’s career started in 1982 at another Ayrshire course, Routenburn GC, held in high regard as the home club of the famous Torrance family.

Working with the legendary Bob Torrance, Iain rose through the ranks to become Head Greenkeeper in 1988, and got access to his first Wiedenmann, a machine borrowed from Ayrshire Council in the early 1990s.

In 1995, Iain joined Beith GC, another Ayrshire club, as head greenkeeper, where he purchased his own first deep aerator, a Wiedenmann from the P-Series.

Four years later, Iain had moved to his current post at Largs GC and purchased a P160, the model distinctive because of its central stand.

“Slow by today’s standards, the first machines had a durability about them, but even then, they were always reliable. You could see the progression in every new model,” began Iain Barr.

“In 2007, we traded the P160 for the brand-new Terra Spike XF, super quick in comparison, another great machine. Seven years later we upgraded again, to the GXi8 HD, also new to the market. Now, in 2022, eight years’ hence, we are still fully committed, trading in the GXi8 HD for another, as it is such a perfect universal machine that can access all areas and remains incredibly smooth.”

Largs GC is a fine parkland course, just 100 metres from the sea line of the Ayrshire coast, with a stellar reputation for being well prepared and true running greens. Iain works alongside four greenkeepers, all fully qualified, who pull together to maintain exacting standards, normally associated with a bigger team.

Their aeration policy, revolutionary for its time, was adopted in 2002, and honed by Iain over the last two decades. He says that superior results are as much about timing, and knowing precisely when to go, as they are about working smartly.

“We plan a greens aeration week for the end of August, only going if the ground conditions are right. A full-on week of effort sets us up well for the winter.”

“If the course is neither too wet nor too dry, the team hollow core each green. Core holes are filled with sand, then greens are sanded again. Next, we spike across the sand with 12 mm tines down to maximum depth, so ten inches (250 mm). Finally, we brush everything into the holes, so they are filled.”

“Playing season closes the end of October, so if we get a dry week in November, at the first opportunity we let the GXi8 open them up again, varying depth from before. We repeat again in early Spring, February or March, deliberately with worn tines to around 175 mm; the worn tine especially kind to the surface, and giving me my money’s worth,” quipped Iain.

“Fairways are treated to a thorough spiking once a year, any time between November-March. We pick a weather window and do them comprehensively.”

“We’re a heavily played course; walk routes and our network of paths get lots of traffic and are used increasingly by buggies and trollies which seal the surfaces much more than before. Also, as an old-style course, a few bottle necks need a little extra attention. So again, if conditions allow, and even if it is mid-season, we will go out with the Wiedenmann to relieve compaction and try to improve drainage.”

As a long-time Wiedenmann UK customer, and their Scottish dealer, Fairways GM, Iain said more than anything else his four purchases have been influenced not just by the quality of machines, but the quality of after sales care.

“I know if I have an issue, it will be resolved; I will be supported, and the machine will be fixed. Wiedenmann UK and Fairways GM have always been good, reliable companies and that’s a big part of the purchase decision. Mike James, Wiedemann’s Northern Sales Manager has been a constant since Beith, and his exceptional knowledge of Wiedenmann products has been invaluable. We’ve also got two Wiedenmann Whispers Twister blowers that are just as versatile as the aerators,” concluded Iain Barr.